The Revd Ben Cahill-Nicholls is Chief Executive of Clergy Support Trust, the largest and oldest charity serving Anglican ministers and their families, and a priest in the Church of England. 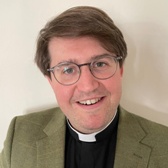 Ben joined the Clergy Support Trust in October 2020. He began his career in the civil service, and then held senior posts in the state and independent education sectors. Alongside work, he studied at St Augustine’s College, and was ordained in 2021.

He currently serves as a self-supporting minister in the Diocese of Guildford, is a Fellow of the Westminster Abbey Institute, and is founder-chair of the youth arts charity RicNic.

Ben lives with his wife, son, and two cats in Surrey. He is a music graduate, and remains a devotee of musical theatre, a passion which he is now trying to pass on to his two-year-old son.

We are now taking bookings for 2023! Dismiss